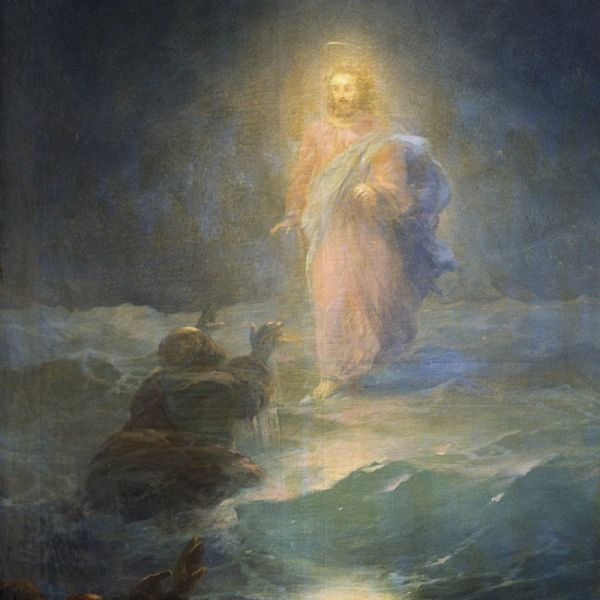 There are no springs in Dothan, in what today is the Palestinian Authority. No springs in a dry land so people were forced to dig pits for water, to dig deeper and deeper until they found it. Joseph was thrown into such a pit.

He was so naïve! To tattletale on his brothers and tell his father that they had done something wrong and then to wear the robe with long-sleeves, the robe that made him look like royalty in front of them when he knew that they had not been given such a robe. Joseph was young and he was naïve. He thought everyone adored him as his father did. He was wrong.

If it wasn’t for his older brother Ruben, Joseph would have been killed. But his life was spared and he was thrown into a pit and then sold as a slave, all within a matter of hours. Joseph’s life went from love and family to slavery in just a few hours. My, how life can turn on a dime! How it swirls around us, full of change and turmoil.

What I always marvel at in this story is Joseph himself. He never seems to despair or give in to hopelessness. He just keeps his eyes on God. Beloved son, slave, prisoner, second to the Pharoah himself, no matter who Joseph becomes or what becomes of him, he never really changes. Because who he is has to do with his relationship with God and no one else. Joseph knows how to keep his eyes on the prize. And he is the father of many nations.

It is so easy to get derailed by life. Circumstances hit us. Loss of a job. Illness. Family drama. Whatever it is, it is coming and we cannot control it. North Korea, riots in these cities, something is going to happen. It always does. The question is not what will happen next in this life but how will you respond. Are you wed to the results of this life or do you have a higher allegiance?

When Peter and the disciples saw Jesus walking towards them on the water, they were terrified. They thought it was a ghost. Jesus yells to them, “Take heart! It is I. Don’t be afraid.” Isn’t it amazing how angels or Jesus are constantly having to tell us not to be afraid? We are so scared by anything that is out of the ordinary, anything out of our control. And God is definitely both of those things.

Peter sees Jesus and makes a request. “If it is really you, command me to come to you.” And Jesus replies, “Come.” So Peter begins to walk on water. And he is actually doing it for a moment or two, those precious moments when his eyes were fixed on our Lord. And then he notices the strong wind and it scares him, the swirling waters, the strong wind, and he is reminded that he is not able to do this, that it is not possible. And then he sinks. And he has to ask for help from Jesus, who reaches out his hand and saves him.

So the question is will you sink or swim? Life is going to throw curve balls at you, throwing you down wells, not treating you fairly and you will have to decide if you can walk on water. The key to walking on water is focus. It’s all about focus.

Joseph was able to move through the various stages of his unfair existence because he had a focus on God. It was God’s story, not his. His job was to be obedient, to see what God would ask of him next, not to criticize the accommodations. He had a level of detachment because he was not the center of his universe, God was. Joseph merely kept his focus on God. It was God who was at work in the world. It was God’s story. He was an instrument in the hand of God, an interpreter of dreams. He was to follow wherever God led him, into the pit and beyond. In other words, life was not about evaluating the most pleasure, it was about doing whatever it was God was asking of him. Joseph knew who was in charge of his life.

In the same way, when Peter focused on coming to Jesus, he could walk on water, but when he began worrying about himself, he sank. It was all about focus. If your life is a blank canvas for God to write the sacred story, you will walk on water.

Let me say that again, if your life is a blank canvas for God to write the sacred story, you will walk on water.

If your life is about you, you will sink.

If your life is about you, you will sink.

Albert Leafwitz was with us last week. He has spent the last thirty years praying for healing and he has been a part of many miracles, but if you ask Albert about his life, it is never about him. It is Jesus. Jesus who heals, Jesus who calls him, Jesus who shows him what to do. Albert is a vessel. It is not about Albert. And that is why, at 92 years of age, he is still in the prisons every day praying for gang members. It’s easy to do God’s work when we don’t take ourselves very seriously.

Dr. Caroline Leaf is a neuroscientist and a Christian. She has identified how thoughts and thinking affect the brain. She actually suggests that by focusing on being thankful, by focusing on doing God’s will and not our own, that we can change the way our brains work. We can feel less hopeless, less depressed. All by choosing to focus on certain thoughts and not others. She calls this process Brain Detox and it’s all about focus. When you wake up in the morning, who do you think of first, yourself or God? Do you ask God for guidance or do you set off on your day without that guidance? Who are you looking at, yourself or God?

Believe me when I say that the only way to a peaceful, joyful, grace-filled life is by focusing on God and God alone. Stop trying to fix your life and make yourself happy! Focus on making God happy. Walk to him and in his ways. And you will find that you are walking on water.