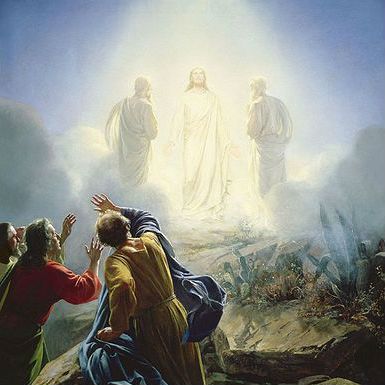 Moses talks to God. He just climbs a mountain and speaks to the Almighty. Wow. Just wow. And the conversations that Moses has with God change the face of this planet. They give rise to the Ten Commandments, to a new kind of civilization, to the Judeo-Christian bedrock that makes much of this world what it is today.

It was quite a talk. And not only did God give Moses some divine information but God changed Moses. When Moses walked down the mountain, he looked different. There was a physical change. His face, it shone with light. It scared everybody so badly that Moses had to put on a veil when he went out to talk to people. It was a miracle. Moses’ face became full of light.

Today is a Sunday of miracles. Moses is changed on Mt Sinai. Jesus is changed on Mt Tabor, transfigured as he talked to God and Moses and Elijah all at the same time. Jesus’ face changes too, though Luke doesn’t specify how and Jesus’ clothes shine as if they are dazzling while. Miracles. Physical things happening when people encounter God.

Peter and James and John witness the miracle that we call The Transfiguration today. They see it because, even though they are tired, they stay awake. They see it because they chose to see it, to look, to watch, to witness. The Glory of God is how Luke describes it. Glory, DOXA in Greek, it means weight, substance, honor, power. It is a word used only to describe God in the Scripture. Only God has glory. And Peter, James and John see that GLORY, that miracle, just as Moses did.

But just like Moses had to hide his face under a veil, Peter and James and John did not tell anybody about what they saw. They knew that people would think they were crazy. Who would believe in the DOXA, the glory, the miracle of what they had seen?

I am here today to tell you all that it is time. It is time for us to take off the veil and talk about the glory again. It is time for us to open our hearts and minds to the fact that there is such a thing as miracles. Yes, I am still an Episcopal priest and I know I was trained to analyze the Scripture and to embrace science and doubt and all that, but I am here to tell you that miracles do exist. I have been a priest for 20 years now and I have seen too many of them not to be honest with you.

Let me pull back the veil and share some with you now. And remember, I am proud to be part of the Episcopal Church, proud that you can doubt and be welcomed here. You don’t have to believe me. It is your choice and yours alone. But I am here to tell you that there is such a thing as the glory of God. There is such a thing as miracles.

We have a special guest today. He is 92 years old and he has spent the last 30 years praying. Albert is his name. Albert comes to us after spending 30 years in Columbia praying for peace and healing among the FARC guerillas. Now he has been called by God to come to Jacksonville mainly to pray with gang members. But I asked him to come and pray with us too.

Albert suffered from a chronic back condition and was supposed to be in pain for the remainder of his life. He was healed of his back pain and told by God that he was to pray for people. He has been praying for people ever since and does not charge a dime.

Albert was also beaten terribly by his father and had a hard time forgiving his father. After a lot of prayer, he was shown by God how the demon of anger had passed down generations in his family. He saw how his father was a victim too and he forgave his father.

So if you need healing of any kind, reconciliation or anything, I encourage you to go over to Albert after communion and let him pray for you.

One of my priests friends, when I told him that Albert was coming, he asked if I had done a background check on Albert. I have not. The man is 92. He is offering to pray for you. Even if you don’t believe in miracles, what have you got to lose?

There is a wonderful movie called Martian Child. In the movie, John Cusack stars as a widower who decides to adopt a little boy. The boy has been abandoned by his parents and he believes he is from Mars. He stays in a cardboard box all the time to protect his skin from the sun’s rays. He wears a belt with heavy objects attached to it so he doesn’t fly away. He is about six years old. His name is Dennis.

In the movie, Dennis’ new dad begins to show him that there are enough special miracles here on earth, that he doesn’t need to be a Martian to find extraordinary events, even miracles. The Children’s Services board believes that Dennis pretends is order to escape his reality and they are not convinced that his new dad is helping him. At the end of the movie, the little boy is brought before the board of the Children’s Services and he is asked about his dad and about the fact that he thinks he is from Mars. Dennis sits there, small and vulnerable at the head of a large table full of serious adults and he says, “My dad has taught me that I don’t have to be from Mars because there are all kinds of extraordinary things right here, like the stars, how do they shine? What a miracle! Or the bug that can fly. Or the taste of Lucky Charms.”

I believe that there are stages of faith, levels you might say of the spiritual life. When we are children, we believe in God simply. When we get older, we question and doubt and study and reason. But when we get older still, or through suffering or just life experience, we begin to realize that we will never be able to understand all that God understands and we will never be able to see all that God sees and we open our hearts and minds to the possibility of the DOXA of God, the existence of miracles, of things that we cannot explain. And we have the courage to pull back the veil and look at the face of Moses and Elijah and Jesus. And we let God be God. And we say, I am willing to watch for miracles.

I am willing to watch for miracles.

I am willing to watch for miracles.