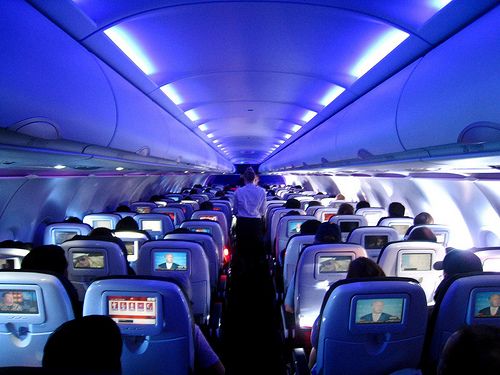 Carla was on an overnight train because her plane wouldn’t take off. She was trying to get to New Orleans for an audition. Her career as an actress was taking off. She had already landed a small role on a sit-com. Her schedule was crazy, living in New York City. She hardly ate and barely slept. Her agent said that the must read for this part. She decided to take a train from New York City to New Orleans. She could catch up on email, study the script. It would give her enough time to get everything done.

At first, she spent all her time on her iphone, texting friends, checking emails, Facebook. Then something unexplainable happened to her phone. It just started malfunctioning. Oh, no! I don’t have time for this! She thought. She turned it off and when she tried to restart the phone it just was dead. DEAD. Nothing.

What was she supposed to do for 28 more hours? Sleep? There was this baby across the aisle that was crying and driving her crazy so she looked over. A young man seemed to be caring for the baby and a little boy all alone. Was there a mother? The dad looked tired.

Carla listened to the baby cry a little longer and then tried making silly faces at the baby. And it stopped crying, reaching out its arms to her. “Can I hold her?” she asked the weary dad. He seemed grateful.

Carla played with the baby, who wanted to chew on her hair. Soon the little boy came over, curious about his sister’s new friend. Slowly, Carla came to know the little family. By evening, the baby and the little boy had fallen asleep and she found herself talking to this young father. As the train rolled on through the night, he told her how his wife had been hit by a car and how he was doing the best he could and it was like a space opened up in her heart. Her busy life was just shoved aside and she was present with this man as he opened his life to her. And she was changed.

They fell in love that night on the train. Years later, she would tell her children that she would never have met their father if her iPhone hadn’t died.

In Jesus’ time, the most precious commodity was food. You never knew when your next meal would be served. Fish had to be caught. Bread made from scratch. Even water was scarce. So the best thing in the whole world was a wedding banquet. The bride’s family would pull out all the stops, there would be meat, wine, bread, dates, and the feast could last for days.

When you went to a wedding banquet, the seats of honor were served food first. So to sit in a place of honor was like a guarantee that you would get to eat. And in a land where food was that scarce, that was a big deal. Everyone wanted to sit up close and be served first. And Jesus gave the radical message to his followers that instead of trying to sit in the front, they should sit in the back and maybe they would be invited up. Anticipate that those who have not yet come are more important than you are, he said. Make room for them. Make room for the stranger.

Eating meals today is not a big deal. We all have food in this country. But what we are running short of is time. Technology is making us feel as if we do not have enough time. So I would like to reinterpret Jesus’ parable to make it more relevant to our day. Instead of leaving space at the table for the stranger, I want you to consider making space in calendars for strangers and for the unexpected. I want you to think of giving your time.

Do not neglect to how hospitality to strangers, says the Letter to the Hebrews, for by doing that some heave entertained angels without knowing it. Make room for people that you do not know. Make space for God to tell you something through people you may not have even met. You may meet someone who will change your life. But you must have time to listen to that person, time for the unexpected. You must retain the ability and the space to listen to your life.

The word angel means messenger. Anyone can be an angel, a relative, a friend or even a stranger. Whether they know it or not, angels carry messages from God. But how can we entertain angels if we have no space in or lives, no time in which to meet them? What if Carla’s phone had not broken? She would have been texting and emailing and she would not have had time for the stranger across the aisle or for his children. She would have missed out on love.

If you take up the prime seats in your life with your current job and relationships and obligations, how can God send you anything new? If there is no space in your life for the unexpected, how can anything ever change?

In order to listen to God, we must not only give God time but we must give strangers time too. We must let people in when we are driving, we must give our attention to someone who makes a request of us, we must try to give make room for God’s Spirit to move. There is another word for giving up the central seat in your life, it is called listening. Or another way of putting it is being present.

Make space for God in your lives. Keep your eyes open to what God is saying and doing. Listen. Watch. Welcome the stranger into your life.

When I was in college, I spent a few summers working in Russian orphanages. My home church gathered toys for the orphans that I would then take over with me. This was before 9-11 before threats of terrorism. My church was so generous that I filled a UHAUL with toys, gum, craft supplies and made my way to the airport with boxes upon boxes. I was so young. I didn’t realize that there is a weight limit on airplanes. There was no way that I could take all that stuff. So there I was, in a long line at JFL Airport in New York with boxes and boxes full of toys and no way to get them on the plane.

A group of Orthodox Jews stood in front of me. When they learned what I was trying to do, they opened their suitcases. A woman threw away a dress, a hairdryer. “Give me some of those toys,” she said. A man shoved his books aside. More suitcases opened. Clothes were being thrown away, toiletries, shoes. The news traveled further down the line. “Give me a stuffed animal! Give me more!’ “I can fit some,” said another teenaged girl.

The people on that airplane made room for those toys. Every single toy made it to Moscow. Because people made room.

Your life is like a suitcase. It is full of appointments and obligations and errands. But you must take some of these things out in order to make room for God. It is essential. Leave space for God in your life. In that way, you will be open to the message of the angels.